Back From the Monastery Part 2: Conventions

In Part 1 i talked about my growth towards being a professional artist through my mentorship with Sam Flegal on a technical level. In this blog post i will talk about my growth with conventions and the ins and outs of getting the most out of your presence behind your booth. I will talk about each convention i went through in chronoligical order. Please enjoy and i hope you learn a thing or two! 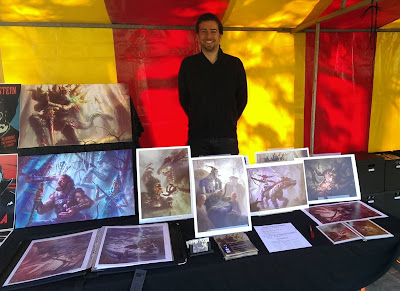 My first convention ever. Technically a disaster, since there were almost no people attending the convention itself, and ofcourse since it was my first convention ever. I was over confident, ordered too many prints which turned out too dark and sat (!) besides the table, head down, drawing and painting; Making minimal contact with any potential buyers. This was a disaster for social interaction. However, surprisingly i met alot of people which opened various doors for me regarding other conventions later on.

1. Artwork looks lighter on the screen than it will be printed, due to it being back lit. Always lighten your artwork a bit before you get it printed.
2. This stuff is harder than it looks! haha.
3. Even though the convention may not be a success, you will meet interesting folks to hang out with or who might even prove a plus for your career later down the line!

This was an outdoors comic con. It went better than the previous convention i have been to but still not very well.

1. Not much. Perhaps a bit easier talking with people and got a bit more into the convention vibe

This convention was a disaster by itself. I was struggling with depression at the time and it showed on how people reacted to me. The second day i felt better, and i asked advice from artist Iris Compiet, who helped me out with my booth perfectly. She at that point had the best booth and presence i had ever seen irl. She helped me with various points below:

1.  I literally left the prints lying on the wood of the table itself. Next time i had to get a tablecloth, preferably a neutral dark one.
2. The prints were strewn on the table. without any order. Time to get some print holders who would make them stand out, to draw attention.
3. Some prints and a poster were stuck to the wall behind me with duckttape. (without any sleeves ) That had to go!
4. Sitting with my head down wouldn't get me any interaction. I had to stand up, and actually invite people into my booth.
5. If you are happy, people around you will! So make sure you are well rested and enthousiastic!

Since this convention was a tought experience i stopped doing them for a while, until my mentorship with Samuel Flegal. He told me i should do the following things: (besides the above)

1. Don't do comissions. It will make you sit down and avoid contact with people.
2. How to talk to people who are interested in your art ( i might get in depth on this on a separate blog)

For that time this was my best convention so far. While the convention itself wasnt that good due to amount of people, i felt i did pretty well. I dropped comissions and focussed purely on representing my personal art in print form, standing up ofcourse. While standing up i felt i was more alert and i could talk better with people about my art. This convention marked the beginning of my successes in conventions.

This convention was just great. I felt like the roles compared to the year before were reversed completely. I was the guy who gave people advice instead of receiving it regarding their booth presence. My girlfriend helped me out and my mother, mother in law and sister in law with her bf came to visit, which is always good for morale.

Having someone to help you out is golden! 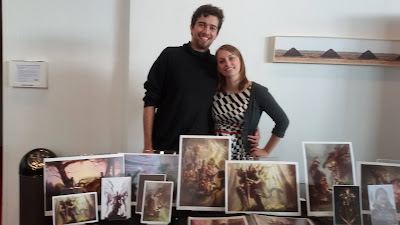 My girlfriend helping me out

This convention was ok. Very little people came. And most of them were comic collectors anyway.

Going to small conventions just isnt worth my time, at this stage in my experience Very little people come so your exposure is limited as well. Time to Take the Plunge into bigger conventions and make a scary investment! However dont do this when you are starting out. learn the ins and outs on smaller cons and grow steadily towards the bigger ones.

Best Convention until then! I had a friend coming out to help me. Having two people operating a 4M table is just the way to go. This was the biggest convention i had ever been to until then and at first it was a tad intimidating, since i invested so much in it. But at the end it just went great!

1. The more you invest in a convention, the more you get out of it on the long and short run.
2. Buy Protective sleeves for your prints 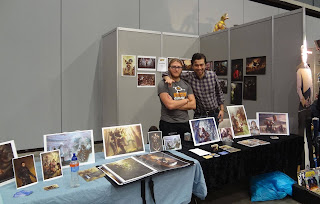 Friend of mine and me at Xmas Comic Con

Again an improvement in the convention scene for me! Not only was it my biggest and most succesful convention to date, it was also one i felt i really levelled up. I went with a friend who had a car. He took various materials with him which facilitated out booth in a positive way. A cardboard covered with cloth which acted as a wall for our prints to lean on, and a rack for his postcards. The funny thing is since i stopped doing comissions, people actually dont realize i am the artist; mostly they think i am a retailer. This has to change! I needed to get a banner.

1. Get a car
2. Get a large holder for my canvas prints
3. Get a postcard rack
4. Get a banner with your name and function on it


Overview of Major things i Learned so far:

1. Its not enough to present quality work. Your booth setup is perhaps as important! It shows a professional attitude towards the viewer and towards your own work. Feel free to get inspiration from my own setup or of artist you have met at your local convention.
2. Be enthoustic and stand up all the time. Standing up makes your blood flow and thus more enthousiastic, and makes people more eager to have a positive interaction with you.
3. Be well groomed and dress nicely. These two things i always tried my best to work on, and might even speak for itself, but people tend to take you more professionaly earlier when you look like you could afford your own work in a heartbeat.
4. When printing prints (for conventions), make sure you lighten them a bit on your computer, since the artwork is back lit, it looks lighter than it actually is when it will be printed
5. Draw your people in your booth an tell them about your work as an artist! Most people dont realise you are the artist anyway in my experience if you are not actively drawing at your booth.
6. Always try to learn new things every convention, be it socially or technically (business modules, gear to buy etc)
7. If possible get a spouse or a friend to help you out. This decreases the workload tremendously.
8. A Simple handshake can do wonders!
9. If possible, get a car to transfer next-level gear to enhance your booth.
10. When starting out you might have a tough convention experience like i did. Dont get discouraged and try to improve each time you do a new ones. You will see that it pays off. No Pain, No Gain.

So this was it, here is a quick overview of my experiences with conventions. Trust me i have way more to tell about this but i suppose i will get to that deeper in other blogposts. Meanwhile i hoped you learned a thing or two from it, and if you have anything to say, please discuss below! 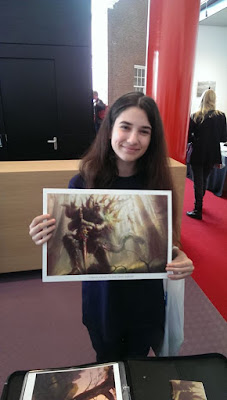 When your art can make someone happy!

I see alot of artists struggling with their internet presence. Now that i have learned a thing or two from that i really would like to share what i know regarding that subject matter.

So stay tuned for Part 3!