Now that ive shared the process of learning the craft through a mentorship i would like to explain how i made various of my portfolio pieces. Today we will talk about my piece the Khan and the Horselord, An interpretation of the tale where the devil promises Jesus the world but he declines, but in this storyline the devil goes to Genghis Khan and promises him the same. The latter accepts thus he becomes the greatest conqueror in history. 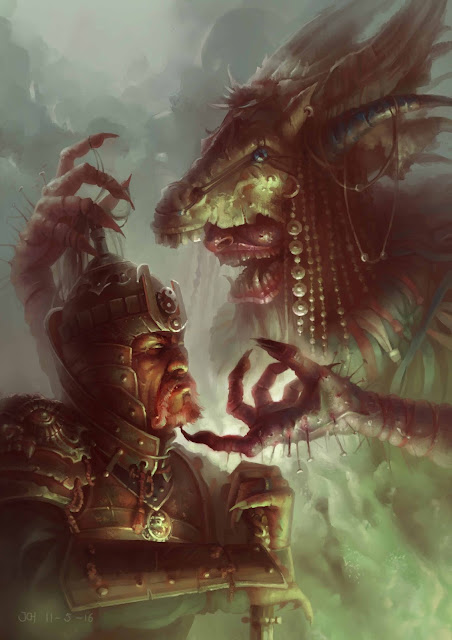 ''Who am i you ask'' The hooded stranger grinned. ''I am a wanderer, searching lands beyond hidden borders for the most capable souls who have the capability and will to wield great power. Only two worthy men i visited, one in Nazareth, and the other one is you, Temujin, conqueror of Mongolia.''

The Devil took him to a very high mountain and showed him all the kingdoms of the world and their splendor.''All this I will give you'' he said,''if you will bow down and worship me'' Feeling presence greater than Temujin knew he was capable to either fight or achieve on his own, he knelt befor the fallen angel, and looked upwards.

The Devils grin broadened. ''Arise, chosen one. Arise as Genghis Khan, and make the world tremble!''

Thats a story i have written to backup the piece!  Now we have got that part out, i will explain how i started.

A process which i use when i would like to view various compositions from a distance without delving too deep into details yet. It helps me to read the image in an instant. if it doesnt work, here, it will never work, so it is important to be critical with yourself when using this method. You can easily pass the 20+ sketches in this method. 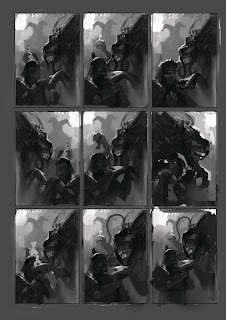 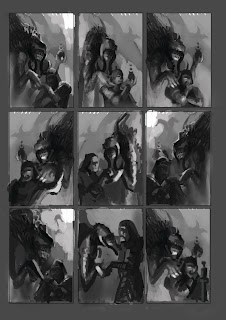 As you can see i tried various poses, closeups, interactions and lighting. Some of them work, most of them dont. Its important  to get as much as possible out of your system, since there might be a better option lurking. You dont know if you dont try!
The way i did this process in quick way is making the thumbnails in a selected layer (so you wont paint outside the box)  and just copy them, and altering them every time. 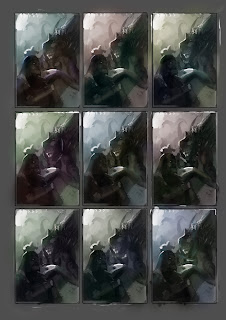 At this point i found myself an interesting comp, where the story in my opinion is told the best. I wanted the focal point to be at Satans hand, where the interaction between the two characters is
taking place.I started to look for a fitting color scheme.
I played around with various color schemes until i found one that emphasised the atmosphere of my story the best. I went with a lowly satured mix of red, blue and green, to create an eerie and foreboding atmosphere.

Now its time to understand what i will be painting. I bought colored lightbulbs and used them to light myself, posed. My apologies for the low webcam resolution. The program i used to take snaps at the time was a free version. As i used the colored light, i noticed interesting things starting to happen with the colors. The unlit areas starting to turn more red, as red is the opposite color of green, which is the light source.

From here i needed to find reference and inspiration for the aesthetics of both characters. Unfortunately i do not have these references anymore. I was stupid enough to throw them away after i was done with them, but i have learned to do better now. 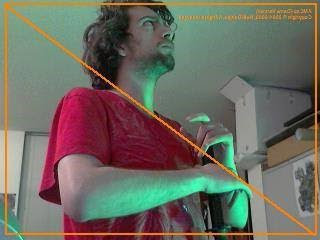 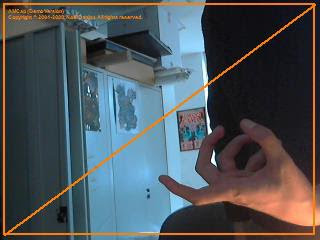 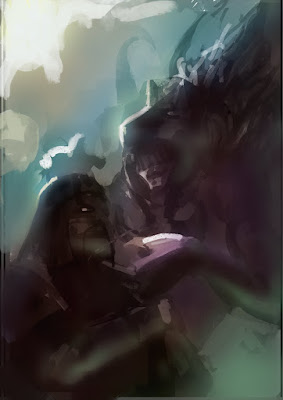 This is literally the untouched thumbnail i decided to use for the project. Everything is there exactly as how i want it to be, 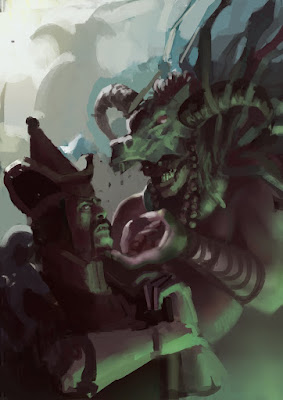 Back when i made this piece, i didn't take the time to prepare fully with reference and inspiration gathering, so you will see alot of trial and error in the subject matter. Again, i learned to do different. At this stage i tried to set a the conceptualization. Satan Took inspiration from Siberian shamanism (the mask) and Genghis Khan took inspiration from traditional Mongol clothing. No offense to mongolian fashion (i like it alot) but it looked more comical on someone as brutal as Genghis so i decided to change it for armor. 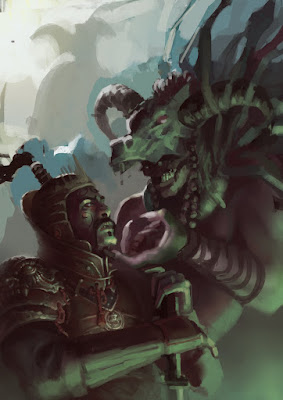 I was lucky here, since i pretty much immediately nailed the armor the way i wanted it to be. Note: This is not mongolian armor. I took inspiration from Medieval Chinese plate armor to make Genghis look more royal, as if he scavenged the armor from a Chinese general or so. 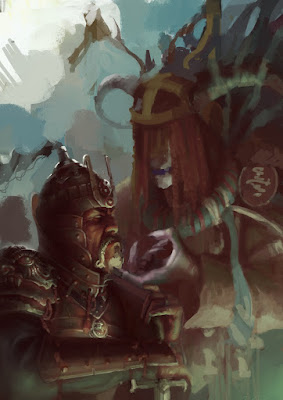 I worked alot on Genghis' face. I used my face a little too much as a reference and he started to look more like an arabian knight, due to my prominent nose. I had to search for correct mongolian features and flatten the face. Also, i rotated Khan a bit, to make it look as if he is leaning on his sword more; kneeling. When i finished the Khan for the most part, i got overwhelmed by the image. I lost control and i started to play around without a sense of direction on the Satan part. The image flattened, the focalpoints and readability got lost. This was a perfect moment to take a step back. 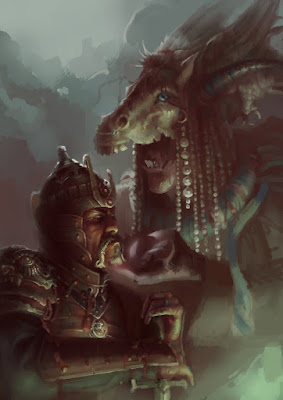 On this stage i started to climb back a bit. I got back to a similar style of the initial horse mask for satan and a background/foreground started to form as well. I defined the silhouette of Satan as well. However, a focal point was still missing! 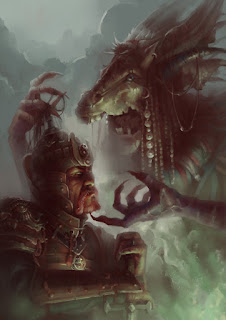 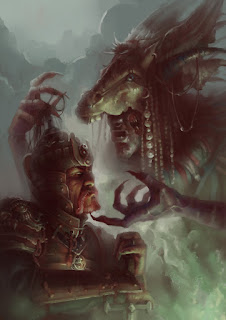 At this point the image is nearing its final form. I made the focal point the hand, bu using the lightest light, and the darkest dark together on the same spot. as well as the harshest contrast. I wanted the image to be about the interaction between the two characters, and the degrading left hand gesture of satan is a key element in that.

I didn't like the left placeholder face of Satan. It looked to dorky and even a bit comical. An entity as satan could at least be more terryfying! so i looked at various siberian ritual masks. i tried something with it, and i felt it aleniated the image of Satan a bit. 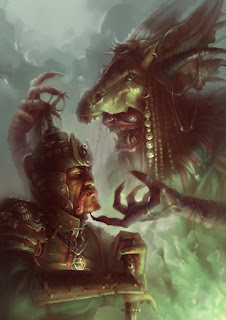 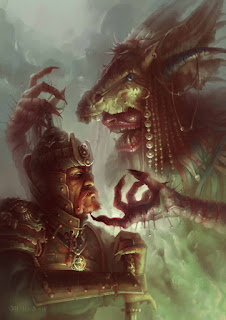 I changed the face of satan to something resembling an asian demon. Since only the lower part of the face was visible, the mouth had to be prominent.  At this point the image is 99% done!The focal point/hand wasnt as detailed yet. you always want to reward the viewer by making the focal point as interesting as possible. I decided to add more flavor to the piece by adding voodoo nails onto Satans hand, as well as some extra textures.

Now the piece is finished. I hoped this blog will help you on your journey as an artist, or if you are just an enthousiast of an artistic process in general. Please share your thoughtprocesses below in the comments, and i will see you next time!

Back From the Monastery Part 4: Epilogue

This will be the last part of my ''Back from the Monastery'' Series, about my mentorship with Sam Flegal. This blog will be slightly bittersweet, but not too hard to handle hopefully, haha. 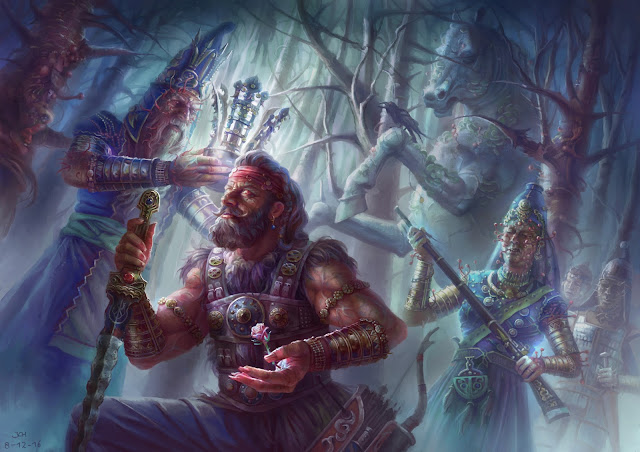 After a succesful year with the mentorship, ehnancing my skills with art, convensions and web presence, it was time for me to set my first step into the world of big people. I was excited for that, but it didnt go without too ups and downs. It started positively. The piece shown above was the final piece i finished under Sam's guidance. It received the best acclaim of any piece i shared so far. It got a Daily Deviation on Deviantart (my first one!) and i got featured in a French Photoshop magazine. I felt i was in the game!

A few months of work ensued, until a few people i was supposed to work with either werent cancelled or dissapeared from the project due to numerous reasons. I didnt have work for a while. And i felt upset, since i expected alot more after being supposedly having a professional level. I felt bad about it, since i am a pragmatic person. If something in my piece is off, and someone points it out, i fix it. It was harder here, since i did not know what to do after getting the quality of my work to a level i wanted.

I talked with various folks, brainstormed and let the time go by. I concluded the following:


When you reach a pro level, and you aren't on top of the food chain, you will have to struggle through it. I barely have contacts in the field i would like to work in, which turns out helps alot on the long run; the Netherlands is more of a comic/graphic design country, which is also why i barley have contacts in the field of art i am doing. I Wondered why i didnt get as many job offers as i could have had, and it turns out art directors tend to hire people way more efficiently when they meet you in real life as well. Emails work way less due to the influx they get each day.

This means i will have to go to other countries to hunt tconventions and the jobs i want on a more efficient way.

When i eventually connected the dots, i calmed and looked at further options to garner my income. Various other seeds besides freelancing have been planted. Besides hunting freelance I am planning to go to more conventions, focus more on print sales, kickstarter and even start a mentorship of my own. All these elements are working slowly atm, but hey, they are working!

Hope these series of Blogs helped you so far. In the future i will try to share something weekly, whatever is on my mind at that point.