Back from the Monastery Part 1: Art

Now you are wondering, what this specific title means, does it have to do something with my absence from blogging for over a year?

I have been training my art skills and business in the metaphorical buddhist monastery with Mentor Samuel Flegal. ( www.fatefulsigns.com ). The mentorship has concluded, and a few months i were set to test my newfound abilities into the world. The results were mixed. In this session i will try to explain what i learned from the mentorship regarding technical skills. 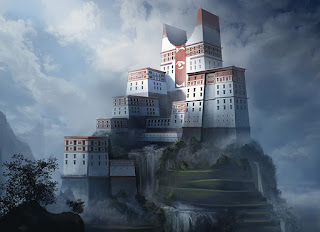 Mystic Monastery by Florian de Gesincourt
So around february 2016 i felt, like many artist at a certain stage, a bit stuck with my art. I didnt have any feedback from professionals and i liked to know at which stage i was in art. I was following the One Fantastic Week show online, and one of the hosts seemed like a cool guy with knowledge that suited my interest so i approached him for a mentorship. We started 2 weeks later. It was mostly concluded my that work was 80% on a being of a professional level. The missing 20% being a lack of a personal voice/creativity, rendering and properly using reference.
Creativity 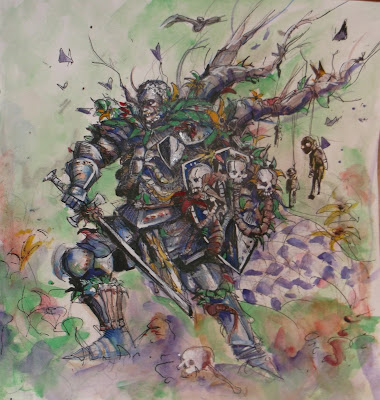 Final Sketch for the Knight of Spring
Reference
For an artistic purpose you could say this piece has value, but technically it lacks various technical aspects. Now it was time to prepare the final piece and make the thumbnails. I have also written a story to guide me on my way. From there i would shoot the references i need to create the painting. 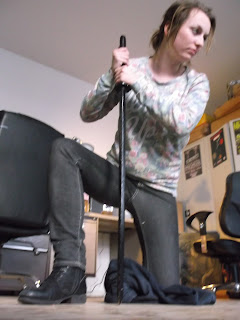 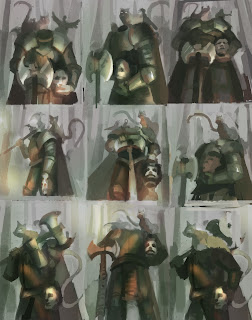 Some Thumbnails i made, none of them which i intented to use. However, it helped me in various ways. Mainly with the narrative.

I also learned that most artists take shooting references to a next level. They even dress up for the occasion and use proper lighting. They make things as easy for themselves as possible. This showed to be a major struggle in this piece since i made a lot of guess work, which kills your time. A few months later, i bought this beauty. A mini suit of armor to guide me with armor, reflections and proper lighting. This saves alot of time guessing and maximizes the realism.

The more you reference, the faster you paint and the better the realism. 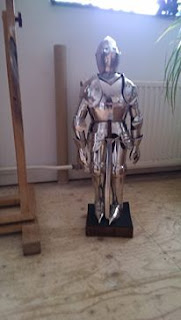 From here, i started painting. The Process took alot out of me. I made alot of basic mistakes and it really plunged me into the deep. Here are some process shots:

Here are the project shots for the piece. As mentioned earlier it was madness working on this piece, since i kept unlocking new ways to work and to fix. I have around 7 PSD files, all of the filled up with small layers fixing this and that.

After i finished the piece at number 6, i posted it online, without asking for a final approval from Sam, and was dissapointed on the response i got on social media. I approached Sam and he told me the piece was not yet ready to post. It was almost done. I didnt get it since in my eyes it was done, but i understood it eventually because of my lack of experience.

I had around 5% left to go to have my first professional piece done! Sam told me i had to look at artists i admired and see how they polished their work. 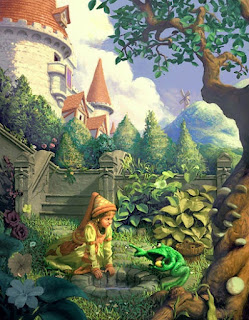 Samuel told me i should compare my work directly to that of artists/art i admired, and i looked for two artpieces i found fitting to the artwork i was working on. I learned that i had more layer of rendering, especially on the focal point. Narrative rendering was crucial as well. Even though the knight was consumed by nature storywise, he still had shining armor. That had to change obviously!

Adding Rust to the knight's armor
FIN
I worked and worked, and soon enough, the piece itself was done. I added a layer of color dodge on it, carefully erased parts to make the focal points pop even more. 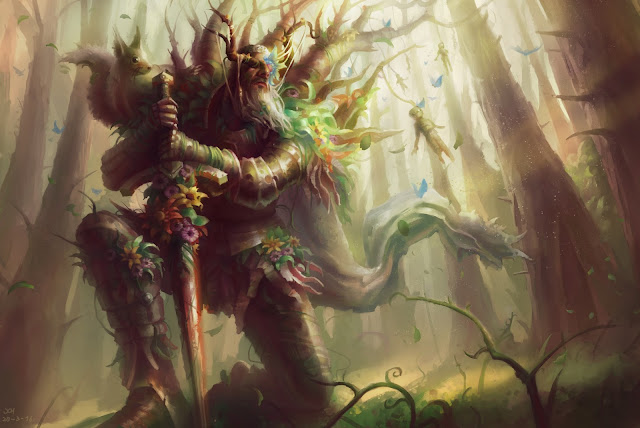 Gawain, Legacy of the Green Knight
Funny thing about certain pieces is that you start your head with one narrative and end with another. This piece depicts Gawain, knight of the round table, being possessed by the spirit of the Green Knight, a storyline that only rolled on the table after i was a long way working on this one.

After i posted this piece, it got a nice reaction from the public. And to this day it is one of my most sought after prints at conventions. It is still the top piece in my portfolio. After this piece i made various other works under the guidance of Sam. Each of those still a major struggle, but none of them can take the place of this piece emotionally, since this piece marks the beginning of my professional portfolio.

Besides working on improving my art, i learned a ton about marketing, approaching companies, and being a part of conventions. I will talk about all these things next time i write a blog.

Thanks for reading this far, if you wish to add a comment please share your experience, thoughts and dont hessitate to discuss,

Wish you the best, and until next time!