Every once in a while i have the urge to talk about the process of my artpieces. In this blog post i will talk about my newest image called Into Valac's Realm. My goal is to teach, inspire and simply guide those interested into my process as an artist.

The image is made as a part of a series, with an emphasis on the Indo Scythians/Biblical Lost Tribes, which delves into their tales of war, heroism and falling from grace through occultism.


The Goetic Memoires describe lands parallel to ours in ancient Arabia that is home to Valac, the Marquis of Snakes. Those daring to travel the lands bringing offerings and sacrifices can expect to be thaught the powers to find treasures and transmute simple minerals to the purest of gold, creating a pilgrimage for alchemists, magi and adventurers alike. 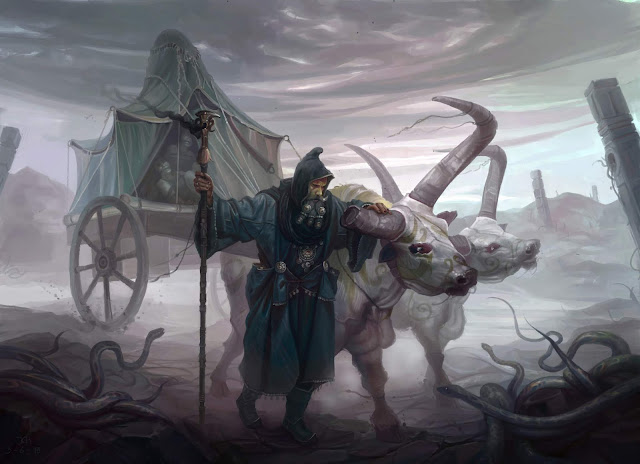 When i saw Sebastiao's photography at his exhibition ''Genesis'', i liked everything about it. The atmosphere, nature and the in depth traversing into the lives of various african Tribes. Various of his imagery have been a major inspiration to my latest art pieces, and also this one below. 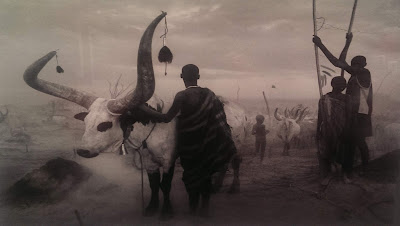 2. The Hamaxobii Scythians
I always like to do my research on the history of various outlandish tribes around the world. Thats where i stumbled upon the Hamaxobii Scythians. Descendant of the Persian Medes who, instead of other Scythians being horselords, they traveled and lived in their tents, pulled by Oxen. This proved to be a major selling point of the painting. 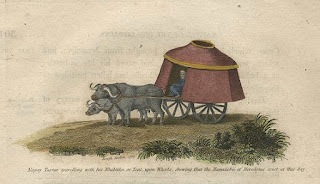 After doing a bit more research on the Hamaxobii, i learned they were descendants of the Medes, who were a persian people, and Scythians (who were a mix of various people in the middle east, caucasus and levant). So i did some research on key elements of fashion from that time, and i found various elements that triggered my interest. One is the Mede gown, which had an interesting fold pattern, and the other being the Archetypical Scythian hat, staff and boots, which i applied to the painting later on. 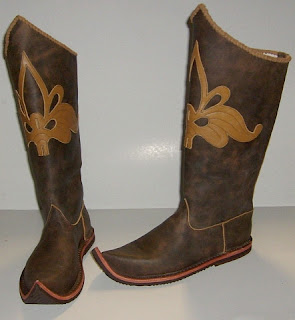 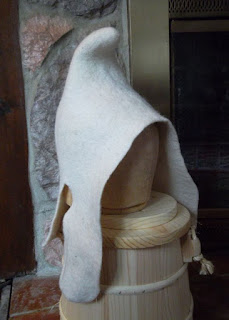 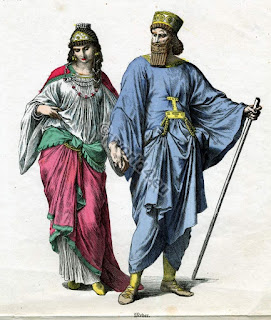 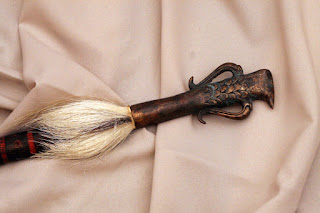 Stage 1: Block-in and finding a narrative

This is the stage where i attempted to blockin the comp and narrative. I still wasn't sure what the story would be about and i let myself be carried away by the placement of the objects. 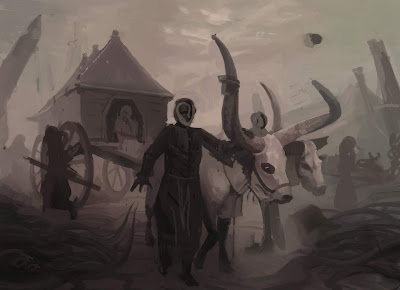 Stage 2: The Magus and the Worm

This is the stage where the image would have been leaning towards a magus with his entourage delving into a Lovecraftian Landscape after hearing a calling (hence the magus influencing the tentacles/worms), something i ditched for the most part due to conflicting narrative elements. 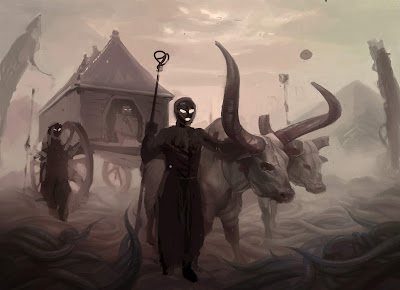 This is the stage where i applied reference shot for the character (Cheers Jesse!) I attempted to replicate the foldings of the Mede Robe shown earlier with clippers. Furthermore i recommend using the Auto Tone function once in a while to get some color contrast fixing in your image. (The image was mostly brown first, but right now it has blue on the light parts and red on the shadows.) 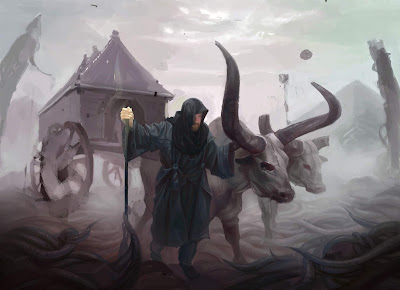 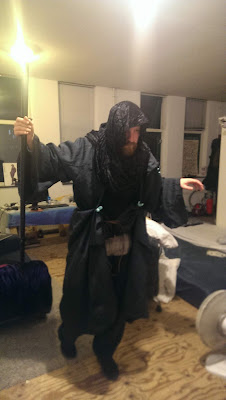 Stage 4: Almost finished the image. Not!

As i almost finished the image and showed it around, most people told me the same thing: The aesthetics work, but the narrative doesn't resonate. Mostly due to the following reasons;

The man, the cart and the oxen don't interact with their surroundings. They just walk like nothing happens and the tent on the cart doesn't tell a specific story. I had to push deeper. The tentacles don't seem to be adding movement or narrative to the image.

It seemed like i still had alot of work to do after all! 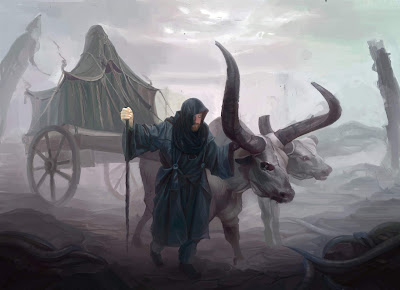 Stage 5: Lambs to the Slaughter

I decided that the image is about a Magus bringing human sacrifices to a Lovecraftian Entity. I changed the tent/cart to hold human prisoners and the oxen to be more afraid of the tentacles. 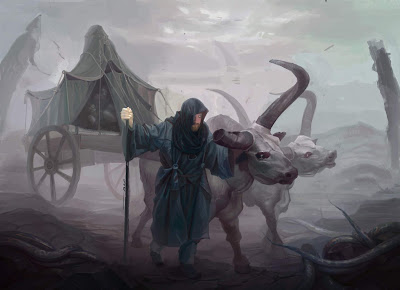 Besides the fact that the oxen and the cart have more narrative, the character felt a little stiff/lacking a story. I decided to have him interact with the oxen more, and have him push one annoyed. I re-shot reference for the face, looking towards the oxen, and the hand being in a more pushing motion. I also made the tentacles more aggressive and darkened the sky to decrease contrast and emphasise mood. 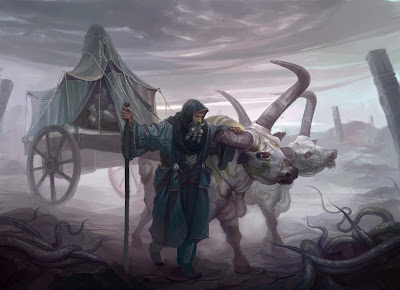 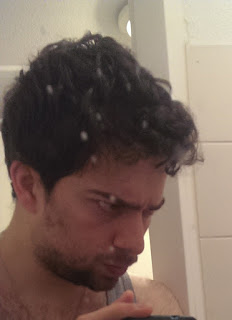 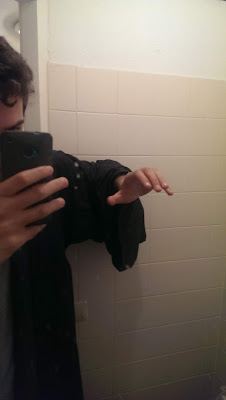 In this stage the image is finished. I finalized all the little details and i even added a final push to the story:

I changed the narrative to something more occult/mythological rather than Lovecraftian. I have always been intrigued by the lore of the demons of the Ars Goetia, the way they look, what they offer, and what they take from their victims.

The Man, descendant from ancient tribes mentioned earlier is a wandering alchemist (See the ornate jewelry and the pouches filled with coins), delving into a parallel universe (see the outlandish structures and turbulent sky), who is home to the fallen angel Valac, also known as the Marquis of Snakes (see the tentacles from previous iterations being turned to snakes). In return for Human sacrifices the demon teaches those who manage to get far enough with knowledge of finding treasures, and transmuting mundane materials into gold. 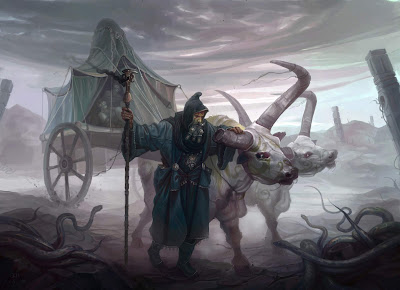 In this image i learned a lot regarding the use of deep narrative. I need to get more extreme with gesture and interactions rather than only making a ''nice picture'', to make memorable imagery. And also very important: i need to dare more

I hope you found use in this blog post. Please comment and let me know what you think!