Every once in a while i have the urge to talk about the process of my artpieces. In this blog post i will talk about my newest image called Khazar Bagathur. My goal is to teach, inspire and simply guide those interested into my process as an artist.

The image is made as a part of a series, with an emphasis on the Dark Age factions, which delves into their tales of war, heroism and falling from grace through occultism. The character depicted is a ''Bagathur'' (meaning hero in old turkic) from the ancient Khazar Empire, a turkic tribe who converted to Judaism around 750 AD, while still maintaining their belief in shamanism.

''We embrace our new god with every fiber of our being, and carry him closest to our heart, however, ancestral stirrings still speak to. They guide our hand, teach our children, grow our crops, and defeat our enemies''. 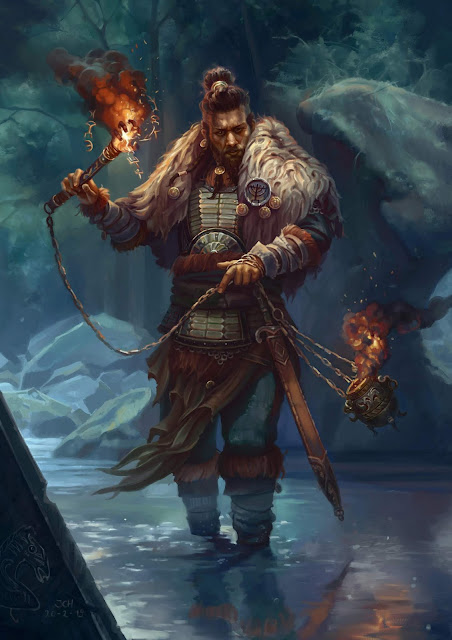 The Hermetic Tarot, The Knight of Wand

I was always fascinated by the Tarot when i first saw a unique variation of them in the album ''Holy Wood'' by Marilyn Manson back in the day. Besides the divination aspect of Tarot, it holds a lot of archetypical imagery which, in my opinion serves as a backbone to a great amount of artwork in the entertainment industry. I fell in love with the artwork on the ''Hermetic Tarot'' deck when i saw it on my trip in Israel in a store. The artwork above is inspired by the ''Knight of Wands'' Archetype. 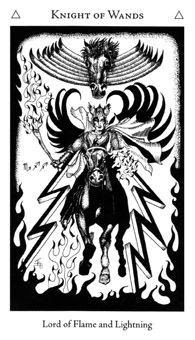 I always liked the haunting aspect of these sculptures, in the water. Originally i wanted the Bagathur to be surrounded by similar burning idols/sculptures, but i found that would require a horizontal and perhaps more dynamic composition. I settled with the main character itself standing in the water, without the sculptures with a more straight forward approach for the character to be in the main POV. 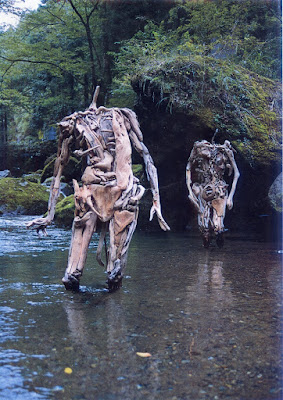 This is a painting by Justin Sweet, done as concept art for Narnia. I have been a fan of Justin Sweet ever since i saw his artwork on the Magic the Gathering set ''Legions'' . His mood and brush efficienty are just amazing, and i wanted to try something similar with my paintings, a warm hard light source coming from above. With Jason, i have a love/hate relationship; i think his work is absolutely stellar, but him entering Magic the Gathering as an artist, raised the bar tremendously for those needing to yet get in, haha. I studied the artwork for ''Mardu Skullhunter'', to push the rendering to the next level (and since both artpieces have the sime idea +/- too. I also got inspired by the gold coins in his braids, i added two on my characters Moustache! 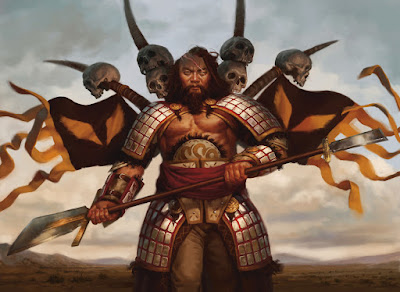 Before i start to work, i gather as much reference as possible, because i dont want to get stuck not knowing how i should paint something. Here is a collection (not complete unfortunately) of items, and where i used them later down the road.

It varies from reference for the fire, furs, apparel/weaponry to overall gesture/anatomy/lighting, environment to smaller details like the Khazar Tamga (Rune) which comes out  of his staff and the Menorah Brooch on his chest. 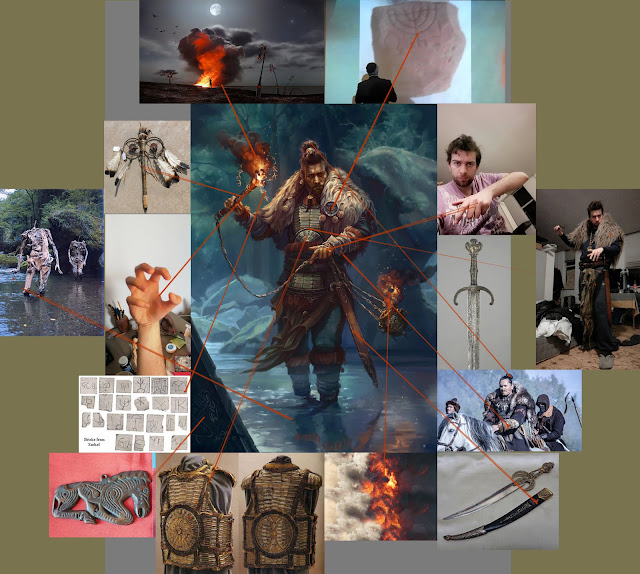 While every step integrates more rendering and details, there are other key parts that i would like to address in each phase:

I always like to shoot my own reference. I can guide the pose, lighting and overall expression/gesture. For this purpose i used myself as a model, trying different poses in front of a filming camera (on selfie mode) and eventually screenshotting a few poses that align with my interest. Filming yourself rather than taking pictures can help with your poses more fluent, due to your screenshots capturing a mid-action movement. 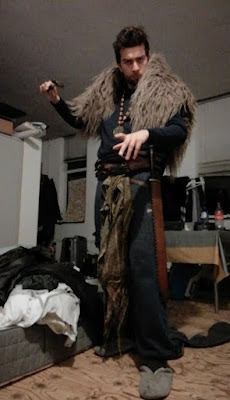 Step 2: Placing inside a scene

For a quick overview i like to place a cutout of my ref into a scene, which is a photobashed version of the water/sculpture showed earlier. Right now i just need to make the values and color correct and i have a base for my image in step 3. 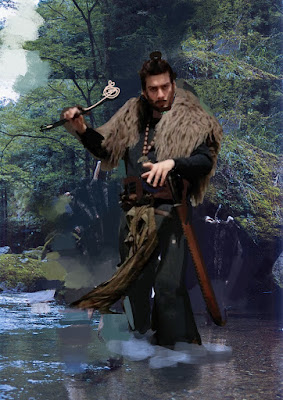 Right now its time to push the shapes and values. I use the mixer brush to blend all the pixels together and refine the shapes after. I should have a clear overview of what my painting should be from a thumbnail POV, and if thats not the case, i need to remain where i am until the image reads decently. I also changed the hand gesture to hold chains, as an extention of the wand he is holding. 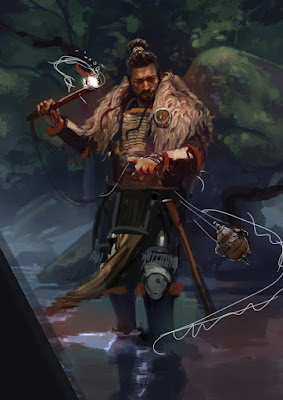 For my reference i used white sheep fur, which proved to be a great focal point behind the darkened background. I enhanced the overall contrast, and pushed the definition of the shapes/rendering. 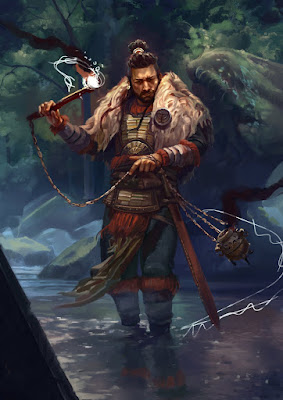 Painting dark scenes, does not have to mean your painting actually needs to be dark, it just needs to have a clear contrast between light and dark areas. Step 4 lacked nuance, and was too dark. I pushed the contrast even more, and started to shape up the secondary, dim lit light sources on his sides. 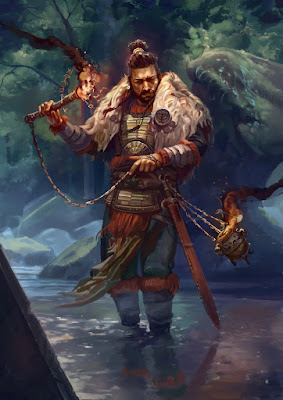 Local color (mostly reds) started to shape up in Version 5, which eliminated the depth. When that happens, i select the ''Auto Tone'' Function (Image-->Auto Tone) on a flattened layer. It searches for the best contrast and color relation and adjust your images that way. top create a more coherent feel. the tool isn't perfect obviously, so you need to adjust areas manually. While this version looks more coherent, it has a uncomfortable green hue that needs fixing. 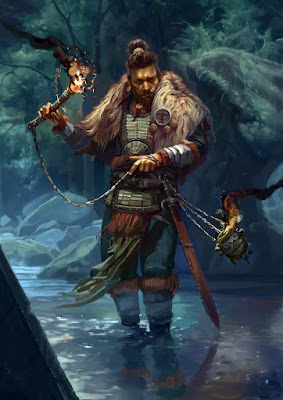 Step 7: Not yet finished

I enhanced the saturation around the flame/lit areas, to have saturated warms, and desaturated cools. On this exact stage i actually shared the painting online, and it received greatly positive response. When time came i spotted various minor issues with this painting that I decided to fix in version 8. 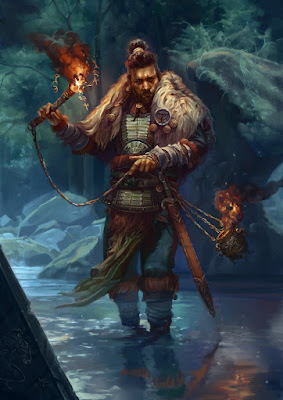 I stumbled upon various issues in Step 7 which are fixed in step 8:

1. In my reference i took in step 1, there was a lot of lens distortion going on. limbs looked bigger/smaller than they were. I copied these mistakes onto this character, who had a head too large and torso too thin.

2. The head missed a tremendous amount of rendering, as a focal point it should be perfect.
3. The arm holding the chain has a tube shape, and not an organic one that starts thin and ends up thicker at the arm-muscles.
4. The loincloth had too much contrast; It fought for attention with the focal areas.
5. The Chain arms needed to form a focal/depth area. I needed to enhance the contrast by lightening the lit part of the arms, and darkening the adjacent areas.
6. There was a tangent between the hand and painted fur beneath the armor.
7. There was way too much detail in the background. It fought for attention with the already detailed character.

8. the character took up a tad too little space in the piece, which resulted in a bit of dead space at the bottom of the water area. Since the illustration leans to a portrait imagery, i wanted the character to take more space in the canvas.
9. Silhoutte was missing around the leg area. I used the loin cloth to push the silhouette and make it more dynamic
10. The blues in the painting were too saturated, which looked a little bit unrealistic. I desaturated them, so they still suggest the color blue, but dont fight with the dominant colors red and yellow.
11. Too little bounce light on the character from the surrounding areas. Needed to add more blueish/cyan tones on the sides of the character to balance things out.
12. Too many darks in the midtones, i removed those and added lighter/more saturated colors instead. Has a more dreamy look to it (needed to pay attention to not kill the contrast), and technically will also look better on phones and print. 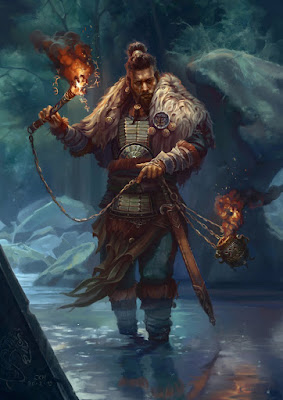 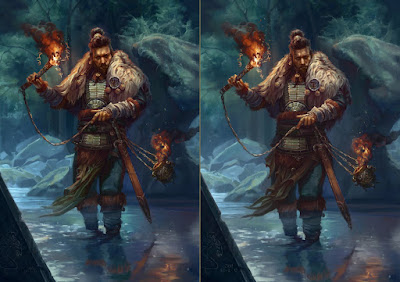 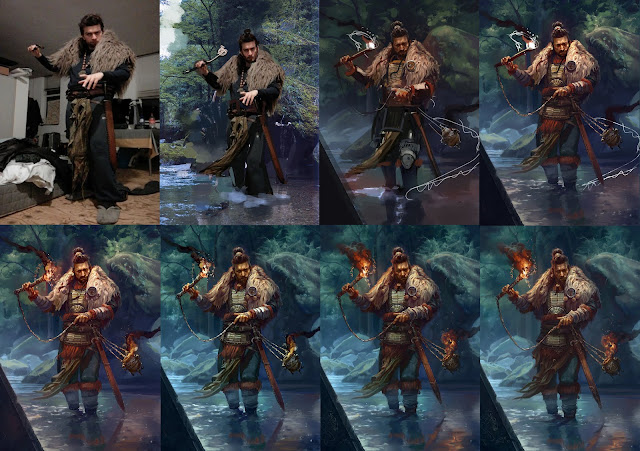 In this painting i did not struggle that much in the process compared to earlier personal paintings. The problem solving went decently, be it technical aspects or conceptual aspects, however the ''dot on the I'' which i tackled in step 8 was a new experience for me to push myself further. I needed to ask myself more critical questions and make A LOT of comparisments with other artists to achieve that result. The final step made alot of difference to me and it gave me great insights on what i can improve in a future painting

**Part two is online very soon! In this blogpost I will address mistakes that have been noticed after this blog post launched

As always, i'd like to read your thoughts; discuss!